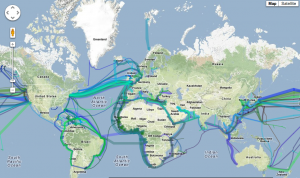 The World Wide Web is Not Just Wi-Fi

A Brief History of Global Communications

Have you ever wondered how you can conduct business from anywhere in the world? Buy and sell instantly? Did you guess, “your smartphone?” or “your wireless internet access?”  Perhaps you thought that most internet traffic occurs via satellite.

However, in a world of Wi-Fi hotspots everywhere, you might be surprised to learn that, in fact, a 750,000-mile web of undersea fiber optic cables makes modern private and commercial communications possible. How did we get here?

“High speed” global communications originated in the mid-19th century when the first telegraph undersea cables were laid. They connected Europe and North America—much to the delight of Queen Victoria and President James Buchanan. To be sure, this early technology changed the future of global communications despite operating at a snail’s pace—delivering only 6 to 8 telegraphed words per minute.

By 1957, the first undersea telephone cable—Transatlantic No. 1 (TAT-1)—speeded things up immensely. By 1988, fiber optic version TAT-8 transmitted data around 15 times faster than the average US internet connection. Today, the Marea cable between Europe and Virginia transmits 160 terabits per second – 16 million times faster than the average home internet connection.

In addition to government funding, major players such as Microsoft, Google, Amazon, and Facebook often cooperate to install the undersea cables. These commercial enterprises allow us to buy and sell goods, exchange news, and send messages at nearly the speed of light around the world. Most of us remain completely unaware of the web of undersea cables that carries all that traffic—until something goes wrong.

Potential Threats to the Web

In 2006, an earthquake near Taiwan caused a massive internet disruption to large portions of Asia including China, Japan, Korea, and the Philippines. Some undersea earthquakes also cause massive landslides that can destroy the relatively thin cables on the ocean floor (in the middle of the ocean, fiber optic cables are roughly the size of a garden hose).

Occasionally, sea animals get into the act. Sharks sometimes attack and bite cables perhaps because they are attracted by electromagnetic fields caused by the 10,000 volts of electricity that flow through relays to power the fiber optic transmission.

Installation errors—involving hardware or software controls—can also wreak havoc later. Consider the complexity of the specialized ships that deploy and maintain the cables. Given this, achieving very high levels of quality control can be tricky.

In recent years, countries and major corporations around the world have become concerned about malicious tampering with the cable network.

For example, during the Cold War, both sides installed methods of severing or disrupting their opponents’ cable transmissions. And even when physical disruption was not planned, sensors that could eavesdrop on transmissions were placed. Fiber optic makes eavesdropping more difficult, but not impossible. Therefore, nations and major corporations remain concerned about malicious interference, especially at exchange locations on land.

Defenses against disruption of the worldwide cable network generally fall into three categories. First, companies strengthen the physical construction of cables and exchange nodes. Also they can diversify the location of landing points and exchanges. Finally, they work together to maintain redundancy in the system.

Fiber optic cables are wrapped with various layers of materials designed to keep them intact and free from intrusion. In coastal areas where the cables emerge from the sea, these layers are usually augmented, including using concrete trenches in very hazardous locations.

In addition, planners have now begun to diversify the location of landing points or exchanges so that they are not clustered in one place. For example, Microsoft intentionally placed the U.S. end of the Marea cable in Virginia, away from the New York City region. Such geographic diversification reduces the impact of extreme weather, earthquake, or even human destruction on the entire network.

Having multiple cables emerging from the sea at many different locations builds redundancy into the network. That is, if one major pathway is shut down, communications can flow through alternate pathways to their intended destination.

Multiple pathways also create the sort of redundancy that defends against the impact of malicious disruption. In planning for extreme conditions, nations, especially for military and sensitive government operations, can use satellite transmission as a back-up alternative.

Many of us have come to reject redundancy as inconvenient, costly, and unnecessary. But in matters of Internet security, redundancy is a good thing. The worldwide web of fiber optic cables is beginning to achieve high levels of redundancy to ensure continual communication in all but the most extreme conditions. That’s a good principle to retain when safeguarding storage and communication of electronic data.

So, the next time you order a pair of Italian leather boots or send your products or services to another country, think about how that order got placed and processed. The worldwide web of fiber optic undersea cables was almost certainly the channel for communicating such information.

Ramp up your business continuity with our IT strategy. Set up a risk-free consultation, today.